Showing posts from February, 2009
Show all

THAT's what those were!

February 24, 2009
Came across the article "Minnesota Aims to be Model for Wind Transport" and when I saw the photo of the nacelle (don't ask me how to pronounce that) on the flatbed semi I realized, "That's what we saw coming down the freeway!" On at least two separate trips, Ruth and I spotted these coming the opposite direction, and had no idea what they are. They look like a missile cone, except that no missile would have things jutting off the side of it...
Post a Comment
Read more

The KARE-11 story disabled comments after at least 62 came in (according to the homepage), so let's see if we can get a conversation going here. Longtime readers of my blog know that I have a passion for pointing out police incompetence, arrogance and abuse of power -- not because I hate police, but because I have so much respect for them and their jobs (having both friends and relatives on the force) and I can't stand it when a few bad apples freak out and do something stupid that gives their uniform a bad name.

Carrie Rindal is one such "peace" officer.

When driving his kids home on New Year's Eve (as I was doing with Ruth and our girls a month ago), Sam Salter made one mistake: He followed the same instructions I've read dozens of places. If you're hit with lights and sirens from a squad car, you to find a safe place to pull off the road and should get off on the nearest exit if you can. (And, as …
3 comments
Read more

For those of you who keep up with my Twitter feed, you already know that I'm lamenting the loss of one of our young guys from our church congregation. (Details of his suicide are at his school's site.)

I didn't know Eric Harms well. When I was doing video work at our church, he was occasionally singing on worship team or performing in a drama. Everything that people have said in his Facebook group seems true -- he was nice and funny and talented.

So, a whole bunch of various thoughts come to mind, all jumbled together:
Suicide is really, really hurtful for the people left behind.Are we "glamorizing suicide" by the outpouring of love for Eric and support for his family?Was Eric's happiness a "shell" or an act? Or did something change recently?Is suicide prevention really possible? I'd bet money that suicidal people thing something like, "It was a poor choice for him, but it's the only option for me." And a more "academic&quo…
Post a Comment
Read more 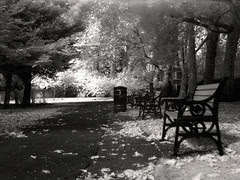 Image by Tea, two sugars via Flickr I don't usually pay much attention the the Sunday circulars, but the one from Office Max caught my attention: They're offering 24"x36" prints, which are usually about $40, for $9.99.

Being the fan of infrared photography that I am, part of me wonders if I should risk hyper-vanity and print some of my photos that size. The resolution of my photos really can't handle something that size, but then again, what can?

Note, by the way, that the photo here isn't one of mine; it's one that was recommended by Zemanta, which is a Firefox plug-in that goes out and finds content that's related to whatever you're writing about. I wanted to play with it, and had to write about something that made enough sense that it had a chance of finding some content. So far, so good. :)