Showing posts from June, 2006
Show all

This could be the one!

June 19, 2006
I just got an exciting e-mail! Sure, it's to my "feedback" address that's published on the Internet, and she got my name wrong, but I think this could be the one! It feels like she's my soulmate! I hope Ruth doesn't find out that I have such an enticing and legitimate interest from a young woman in Russia: Hi, Curt I'm a very young and energetic lady! I have very positive attitude to life and people. I do enjoy new experience life can offer me: to see new interesting places, to meet new people. I do try to enjoy every moment of life and accept everything the way it comes without complaining. Though my life seems to be quite enjoyable there's one important thing missing. It's LOVE! Without my beloved one, my soul mate, my King my life is not completed. I wish i coud find him very soon so that we could share together every momement of the life-time romance! What about you? Could you be my King? If answer is "yes" - you can find more
Post a Comment
Read more

June 15, 2006
For those of you interested in theological side-trips and denominational differences... check out Between Two Worlds: The SBC Resolution on Alcohol . (Do note that "Baptist General Conference", of which Berean Baptist is a part, is not the same as the "Southern Baptist Convention", of which Justin's post speaks.)
Post a Comment
Read more

June 14, 2006
In one of those "mysteries of the unexplained" books from the 1980s, I read about a story of weird reddish rain falling on people with a variety of bad effects. Here's a more current version of the same thing. If it turns out that some guy in India has the Andromeda Strain sitting in his laboratory... well, you heard it here! CNN.com - Mysterious red cells might be aliens - Jun 2, 2006
Post a Comment
Read more

June 09, 2006
An excellent review of the myvu display, including a comment (but not much detail) about something of particular importance to me. From Mobility Site - myvu – a personal media viewer : "One concern you might have is whether or not you can wear glasses with the device. The answer really depends on the size of your glasses. I have several pairs of eyeglasses and found that I could use ones that had smaller frames although it would not be optimal for comfort. However, there is a prescription lens snap-on option (integrated with nose pad) that you could get to aid in viewing."
Post a Comment
Read more

June 09, 2006
As soon as they come to a local retail store so I can check them out personally (or, I suppose, as soon as someone I know buys one and lets me look at it), I'm gonna play with the myvu personal media viewer . Finally, the concept of video podcasts makes sense. Yes, HMDs have been around for years, but something this light and inexpensive? Now that's new!
Post a Comment
Read more

June 08, 2006
WOW! I actually heard back from Google! I still hate that more and more companies consider it "customer service" to send out form letters without any thought to whether they make sense or not... but I give huge credit to Google that, when you say "Your form letter makes no sense!", they have a real live person respond with something that you can actually understand! So, Kudos to Google! What was the problem? Well, here was their response: Hello Eric, The language we were specifically referring to was: "So, if you're into giving your opinion for money (i give mine for free :)) go ahead and click on the ad :) Questions, problems, worries? Go ahead and post a comment. :)" We felt that it is misleading to your users as the most prominent ads on your site are from Google. Now, before you think that my wife is some evil person who's telling people to click on Google ads... here's the actual post in question (which we've now removed fr
Post a Comment
Read more

June 08, 2006
After reading sites like Google-Adsense-Sucks.com Class Action Law Suit , I realized something: I'd better make sure there weren't any ties between this site and Google, or else Google could ban me for saying bad things about them. You'd think they couldn't do that, but they really can do anything they want. So, now we have an interesting ethical situation. Given that I'm not a Communist nation, will Google choose to censor my free speech or not? They can't ban me from AdSense based on what I say about it on this blog, because this blog isn't related to my AdSense account in any way, shape or form. So are they going to ban me anyway, or are they going to try and figure out a way to ban me based on my wife's fully compliant blog... or will they drop the issue entirely? For what it's worth, their M.O. seems to be a letter stating that a site is banned because of "invalid clicks" -- which is misleading, because it's not that someone
Post a Comment
Read more

What does Google use? 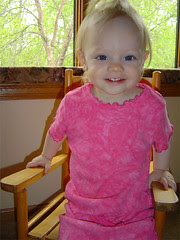 By the way, as I await a response from Google (which I probably won't get)... if anyone's interested in the specs of the systems that Google uses to make false accusations against blog authors, here's what our log turns up. We got just one hit, going straight to the archive, and then it took them a day to craft their form letter to me: VISITOR ANALYSIS Referring Link: No referring link Host Name: 216-239-45-4.google.com IP Address: 216.239.45.4 Country: United States Region: California City: Mountain View ISP: Google Inc Returning Visits: 0 Visit Length: 0 seconds VISITOR SYSTEM SPECS Browser: Firefox 1.5.0 Operating System: Windows XP Resolution: 1600x1200 Javascript: Enabled Navigation Path 6th June 2006 08:38:54 PM ralarson.blogspot.com/2005_07_01_ralarson_archive.html No referring link Oddly, it seems there was a Google image search that brought up the same archive page the day before, by someone in Anchorage. We have no way of knowing what their
Post a Comment
Read more

June 07, 2006
I wondered how long it would be before Google screwed up something, somewhere, and decided to start bullying us about AdSense. Even though they're making money hand over fist with the program, the word on the webmaster forums out there is that they have a nasty tendency to shut down accounts on false pretense. But we'll hope that's not the case here. The funny thing is, they're not complaining about my little yellow note on this site; they're on my case about my wife's blog! Wow! At least I'll have some topics for the podcast now! Check out Google AdSense - Program Policies for a little light reading, (and maybe take a peek at the page they dislike over at Ruth's Blog )... and then see if my Minnesota passive-agressive response to them makes sense: ----- Original message ----- To: adsense-support@google.com Date: Wed, 07 Jun 2006 22:36:26 -0500 Subject: Re: Google AdSense Hello! Please explain in additional detail how pages such as http://ra
Post a Comment
Read more

June 02, 2006
The good folks at Click.TV just released their new Self-Service functionality, so I'm playing with that here. It probably doesn't look too good, squished into my blog format, but the point is that you can stick a Click.TV-wrapped video on any web page that you want to.
1 comment
Read more
More posts