June 08, 2006
After reading sites like Google-Adsense-Sucks.com Class Action Law Suit, I realized something: I'd better make sure there weren't any ties between this site and Google, or else Google could ban me for saying bad things about them.

You'd think they couldn't do that, but they really can do anything they want.

So, now we have an interesting ethical situation. Given that I'm not a Communist nation, will Google choose to censor my free speech or not? They can't ban me from AdSense based on what I say about it on this blog, because this blog isn't related to my AdSense account in any way, shape or form. So are they going to ban me anyway, or are they going to try and figure out a way to ban me based on my wife's fully compliant blog... or will they drop the issue entirely?

For what it's worth, their M.O. seems to be a letter stating that a site is banned because of "invalid clicks" -- which is misleading, because it's not that someone is sitting at a computer clicking on a bunch of ads. Their argument is that, since you're not following the TOS, the clicks you received are invalid.

The problem in my current case is that I am following the TOS, so we'll see where it goes.

Anyway, in the past -- in my pro-Google days -- you might have seen ads here as I was testing things out... but no more! My speech won't be stifled! :)

July 08, 2005
How would you feel about being charged a fee so you have the option of legally doing something you have no interest in doing in the first place? It would be enough to keep me away from Hampton University, just on principle. According to the article Campuses blocking illegal downloads: "The school signed a contract with Ruckus, a company that will provide students with unlimited music and movie downloads. HU will charge every student who lives on campus a fee of $80 for the service, whether they use it or not."
Read more
September 21, 2004
A visual guide to navigating blog comments | Blog | 1976design.com Since I've been playing with my blog (boy, does that sound bad!) I figured I'd turn on "comments" and see if anyone is reading this -- and dares to comment on something I've posted. This particular post isn't very comment-worthy, but seemed relevant.
Read more 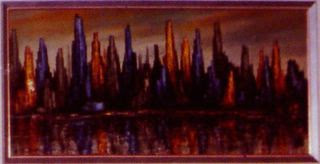 That's definitely a MAIO -- they have a photo of the signature in the eBay listing. And the buildings are absolutely identical to the painting my uncle had... if you start counting them from the right. But this painting on eBay right now is wider than my uncle's! The buildings in his just stop as you move from right to left, and the …
Read more