Showing posts from March, 2010
Show all

More on church community (and how to build it)

March 27, 2010
http://jeremypryor.wordpress.com/2009/04/30/driscolls-great-commission-magic-... Favorite quote in the comments: "I don???t want pesticide on my fruit of the spirit"
Post a Comment
Read more

In Pursuit of Community: What Can We Do?, Pastors, Church Ministry Leadership

The Chief Purpose of Universities: Academic Discourse and the Diversity of Ideas

March 25, 2010
http://www.mellenpress.com/mellenpress.cfm?bookid=6259&pc=9 I need to read this book: "Bowen and Schwartz begin by reminding us that universities exist first and foremost 'to create, preserve, transmit, and find new applications of knowledge so as to enhance free choice throughout society.'"
Post a Comment
Read more

What's a yellow cross mean on a WWI uniform? 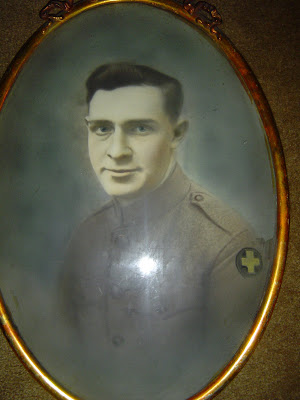 UPDATE: We found the answer -- in less than 15 minutes, thanks to friend and colleague Jess who apparently knew the magic keywords that I couldn't find. The remaining mystery is why Chuck, who grew up in Minneapolis, was tied to a division based out of Illinois... This is Ruth's great-uncle Chuck. Chuck didn't have any kids so when the old photo eventually ended up in our hands, we sold it off for the frame. Maybe a good idea, maybe a bad one. But what are you going to do with a big picture of someone who nobody really knows (or knew)? Anyway, from a geneology perspective the mystery is: what does the patch on his shoulder represent? It was a yellow cross on a black background, which seems rather unusual.
Post a Comment
Read more

40 Tips for a Better Life

Whatever happened to Greg and Heather Mroz?

March 16, 2010
This was a big story back in October: " I Thought I had Insurance " But whatever happened to them? United Healthcare admitted it was wrong... but did it ever "fix the glitch," or are Heather and Greg Mroz still on the hook for a half million dollars of costs that they don't really owe? According to a cached copy of a page from Health Care for America NOW , Heather Mroz, 24, Coconut Creek, Florida, and her husband, Greg, face $480,000 in medical bills after United Healthcare canceled Greg’s $1,260 a month policy he had through his construction job for “failure to negotiate” new premiums prior to the premature birth of their twins, Hannah & Wyatt, in June 2009. Greg‘s company went out of business in March, and the family arranged to pay UHC directly while COBRA was being worked out. UHC gave the hospital approval in writing, saying it would pay for everything connected with the pregnancy even if it was high risk because she was having twins. Heather was
Post a Comment
Read more

March 16, 2010
From http://www.mattbacak.com/articles/tips-for-identifying-your-niche/ I find very little to motivate me towards any of these... Which explains why I feel burned out on the idea of "internet marketing" in general... 1. Real Estate 2. Weight Loss 3. Network Marketing ??? I???m not saying network marketing to be in network marketing; I???m saying telling people how to make money in network marketing. 4. Wealth Building 5. Internet Marketing
Post a Comment
Read more

March 14, 2010
Tim got me pointed to 1st Peter and I think meditating on chapter 1 will give me my answer for how we balance "fighting the evil one" vs. "letting God's will reign"...
Post a Comment
Read more

March 12, 2010
Pondering discussion questions for our worship pastor (who'll be talking to our little adult Sunday school this week, health permitting -- join us; ping me for details if you need them). And I'm wondering about where he falls on the "can we thwart God?" question. He's a Calvinist (but we love him anyway) so I suspect the answer is "No"... But as he said last Sunday (listen to episode 126 at www.ericast.com for the quote) he felt he had more good years of service to God in him and is surprised that he's going to die at just 51. So... What does God think? "Yeah, it's a shame you built all those model airplanes as a kid and the xylene in the glue hosed your gall bladder; too bad that Satan can use that in the fallen world?" Or, "No, its my prerogative and I'm taking you home now?" Or, "Well, that's just how it happened to go and I'll work around it because I'm God and I'm that good?" Thoughts?
Post a Comment
Read more

What does this mean for us (me) today?

March 07, 2010
http://scitech.foxnews.mobi/quickPage.html?page=23952&external=197738.pro... Was just listening to a podcast about gaming... Wondering how successful the concept can be...
Post a Comment
Read more

March 01, 2010
It doesn’t take lots of expensive technology to make a video like this – just pull together the creative people in your organization and have a bunch working together, each doing their own parts with their own personal skills and talents. Nice.  A good message, and even more funny (in a good way) if you know the people who are featured… http://www.rivervalleychurch.org/video/originals/Lotza_Money_0.m4v
Post a Comment
Read more
More posts