November 02, 2016
In the world of social media management, sometimes you encounter people who don't quite get it. And that's OK. But sometimes you encounter the "collateral damage" that those people do. So, here's a brief Public Service Announcement on how Twitter blocking works, and might have unintended consequences for you and the people who rely on you.
Here's the background: I had seen an interesting exchange between two Ed Tech personalities: Shelly Terrell publicly complained that someone had @-messaged her (a public "nod" or "head's up" on Twitter and other social media platforms).  She asked that they direct-message her instead.
That's a really odd thing to say.
Sure, you can use Twitter however you want to, but that's really not what it was designed for. Or, at least, it's unusual to complain that someone is using a key notification feature of it; @-messages were really early innovation and were quickly folded into the platform.
Since Twitter is a public forum, and is designed to be public, and this was a strange conversation to be having in public, I thought it was worth a mention:
https://mobile.twitter.com/emlarson/status/792540062466478080 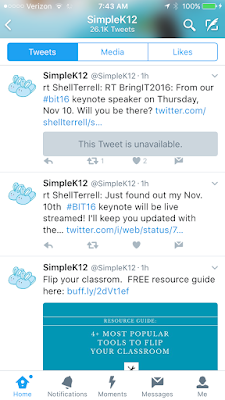 That stands out as unusual.
So I clicked through, and it turns out that Tarrell blocked me.
"Blocking" on Twitter is much more aggressive than "Muting".  If you got tired of seeing my tweets related to Richard Marx, for totally-not-quite hypothetical example, you could "mute" me and I simply wouldn't show up in your feed. It controls what you see. But a "block" actually prevents any contact, including the fact that the blocked person can't see anything that you post.
But there are two problems with that.
The first is that a blocked person can totally see everything that you post, simply by not being logged in to Twitter. Unless you have a private Twitter feed, which means you're  using Twitter in a sanctioned but totally different way than the public stream it was built to be, blocking doesn't make any sense.   It's a placebo against bullying and harassment, but there are plenty of other options to engage in bullying and harassing if someone's stream is public.
The bigger issue in this case is that the block will follow down a re-tweet path, and people who retweet you might not even have their tweets displayed to people they intend.
Let me explain.
Terrell is keynoting a conference.  SimpleK12 mentioned that in their Tweet and linked to it, but Twitter couldn't display Terrell's content to me (because she blocked me, and that's what blocks do), so I got the "This Tweet is unavailable."
But what the conference host might not realize is that their re-Tweets of Terrell aren't even visible to those in their target audience (me) if Terrell has blocked them.
"Really? No way!" Yup.

Here's an example. Here's what they are recent tweets look like to those who haven't offended or antagonized Terrell: 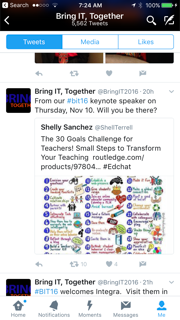 That's since looking Tweet! Good headline, promotes Routledge, tells me Shelley Sanchez is the keynote speaker. Well done!
But that's not what I see. What I see is: 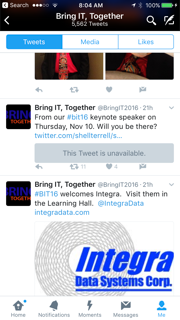 Without knowing enough about Twitter to know how its Blocking feature works, that just looks... Broken? Incompetent? Expired? Cancelled?
It certainly doesn't get my attention or encourage me to spread the word about the conference.
This doesn't affect me in the least (if it weren't for scheduling conflict, I still couldn't attend this particular conference in Ontario because I don't have a current passport), but most conference organizers wouldn't opt to hire a keynote speaker who has a propensity for running around trying to throw hoods over potential attendees' heads.
So, how do you fix this? Two things:
1) Choose keynote speakers with a social media persona that works for your goals, not against them.
2) Screenshot valuable content and include as a photo, not merely as a retweet, so that your post has a visual element that carries through to your readers regardless of other users' account settings.

August 17, 2005
In his latest podcast ( Blogarithms IT Conversations News: August 14, 2005 ), Doug Kaye mentioned an interesting anecdotal tidbit: People seem less interested in panel discussions at conferences than they do in single speakers. The panel discussions get lower ratings at ITConversations.com, and... there was some other reason he mentioned it, too. (Okay, so I don't remember. Sorry!) As I was listening to one of their panel discussions this morning, I had a thought: It was really hard to follow. It takes a lot of mental energy to keep up with who's-saying-what. And I don't even particular care about the who's-who; it would be even worse if I really need to know which person was making a particular point. Could that be what people are reacting to when they rate panel discussions lower than single-speaker talks?
Read more